“One for the rook, one for the crow, one to rot and one to grow.” 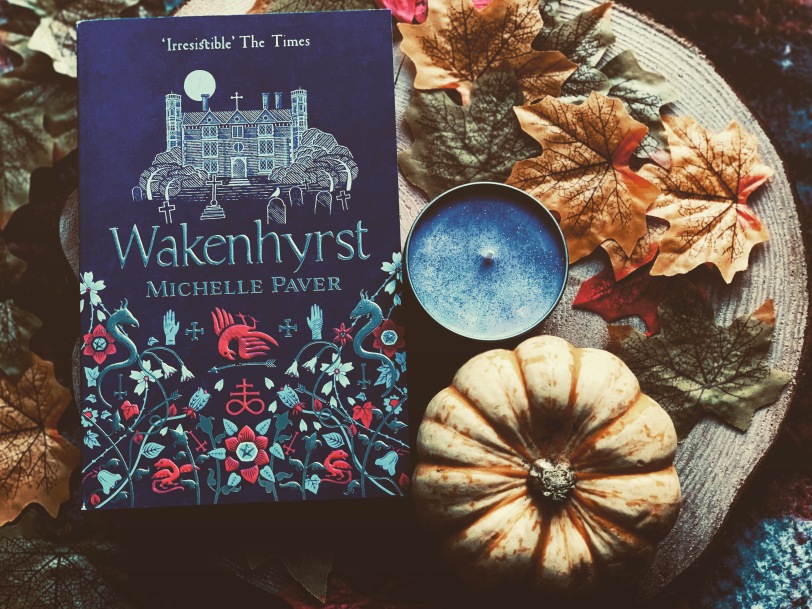 1906: A large manor house, Wakes End, sits on the edge of a bleak Fen, just outside the town of Wakenhyrst. It is the home of Edmund Stearn and his family – a historian, scholar and land-owner, he’s an upstanding member of the local community. But all is not well at Wake’s End. Edmund dominates his family tyrannically, in particular daughter Maud, When Maud’s mother dies in childbirth and she’s left alone with her strict, disciplinarian father, Maud’s isolation drives her to her father’s study, w here she happens upon his diary.

During a walk through the local church yard, Edmund spots an eye in the undergrowth. His terror is only briefly abated when he discovers its actually a painting, a doom, taken from the church. It’s horrifying in its depiction of hell, and Edmund wants nothing more to do with it despite his historical significance. But the doom keeps returning to his mind. The stench of the Fen Permeates the house, even with the windows closed. And when he lies awake at night, he hears a scratching sound – like claws on the wooden floor.

Firstly, I would like to say thank you to Dark Room Tours and Head of Zeus for asking me to be part of the bookstagram tour for this book. I am very grateful.

I absolutely love the writing style that the author adopts in this book. It really adds to the gothic and eerie atmosphere that it promises. The description and the scene setting is wonderful and really does help the reader to feel that they are part of the story and not just reading the book at home on their sofa.

This book is different in the sense that the reader knows exactly what is going to happen at the start of the book and then we work toward finding out why it happened throughout the duration of the book. I find this very unique and I actually enjoyed this concept. It allowed me to form many different theories at the beginning of the book, also forming questions that I knew I wanted answers to throughout.

I loved Maud as a main character, I felt sorry for her a lot of the time. Her childhood was awful, but she overcomes this so well and is such a strong character. I really enjoyed watching her to develop into the character that she ended up being. I also enjoyed watching Edmund as a character, obviously he is on the decline, but I found this so interesting that I just wanted to know more and more. These characters alone made it difficult for me to put the book down.

One thing I would say is that the discrimination, namely sexism is very prevalent in this book and sometimes it made for quite a frustrating read. Nothing against the author, it is very much in sync with the times and is very necessary however sometimes difficult to have to read as a female in the 21st century.

I would also say that whilst this was an eerie read there was something missing for me. I’m not sure what it was as the writing was very atmospheric but I wanted more. I think after finishing this book I wasn’t entirely satisfied. The ending I feel was slightly rushed and would have maybe benefitted from being another 20 + pages as there were still questions that I feel were left unanswered.

However despite the above I really enjoyed my time reading this book and would pick up another by this author. I would recommend Wakenhyrst to other readers.

Published by The Anxious Bookworm

View all posts by The Anxious Bookworm