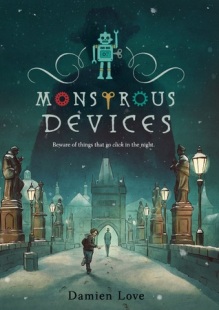 On a winter’s day in a British town, twelve-year-old Alex receives a package in the mail: an old tin robot from his grandfather. “This one is special,” says the enclosed note, and when strange events start occurring around him, Alex suspects this small toy is more than special; it might be deadly.

Right as things get out of hand, Alex’s grandfather arrives, pulling him away from an attack–and his otherwise humdrum world of friends, bullies, and homework–and into the macabre magic of an ancient family feud. Together, the duo flees across snowy Europe, unravelling the riddle of the little robot while trying to outwit relentless assassins of the human and mechanical kind.

Firstly I want to say thank you to Rock the Boat for sending me an early copy of this book for review, I really appreciate the opportunity.

I had really high hopes for this book, I’ve read a lot of middle grade and whilst I am not the target audience I feel like I can appreciate them all the same and I really enjoy splitting up my heavy fantasy reads with these throughout the month. I have never read one involved Robots so this was something that I really thought I would enjoy. I did enjoy it, but it was just okay for me.

I enjoyed the world building and the descriptive nature of the authors writing style. From he very start you are introduced into a world that you do not struggle to picture. As a reader you can really immerse yourself into this book and forget about the world around you. This is also a quick read which many will be able to finish within a sitting.

There seemed to be a lot of action within this book, but in the end I felt that a lot of the action was just for the sake of it. I mean, I love action packed books just as much as everyone else but for one of the first times ever I felt myself asking the author to stop putting so much action in and give me a bit more background with the characters.

The characters I feel were really underdeveloped and I didn’t get from them what I really wanted and look to. If I can’t make a connection with a character in a book, especially the main ones then the book just isn’t for me and this was one of those. I hated the Grandpa like seriously hated him. He was not a likeable character and I found myself skim reading a lot of the sections involving him because he really wound me up.

There were also a lot of unanswered questions that I feel could have been addressed. I mean, this may well be a series but I feel like not enough information was put into the first book. Not a lot of questions were answered so therefore I do not have the urge to pick up a sequel if there is to be one.

Would I read something from this author again? Yes, I will always give an author a second chance. Would I pick something up from this series again? No, it just isn’t for me. There are some cracking reviews from people who really enjoyed this book though. Like I said, I liked it but that is as far as it went it was too problematic for me to rate it about 3 stars.

Published by The Anxious Bookworm

View all posts by The Anxious Bookworm